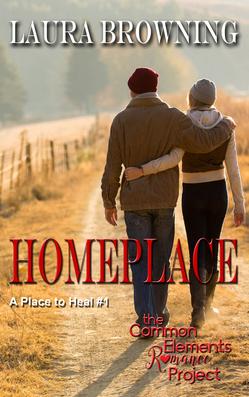 Amanda wasn’t much on covering weddings. In fact, she hated going to them. As far as she was concerned, it was a pointless institution designed solely for legitimizing children…or wasting money on something that statistics said wouldn’t last anyway.

Her boss had other ideas, at least about this wedding. Two big family names in the county. Two businesses joining forces. A marriage and a merger. Two stories in one.

So here she was on a sunny fall afternoon, strolling around the grounds of the Homestead, snapping pictures and making nice. Catherine and Stoner Richardson’s farm, the backdrop for the wedding, was perfect as always. A sprawling brick façade with many-paned windows standing majestically atop one of the many hills in this part of Virginia.

In so many ways, it reminded her of Oak Knoll, where she’d grown up and her parents still lived. In fact, her parents sometimes socialized with the Richardsons. Amanda wouldn’t call them friends. The Browns didn’t really do friends, just advantageous connections. She had a feeling the Richardsons were a lot more human.

Her editor wanted more than just the standard wedding portrait and caption. He wanted a story on the Allreds, the Mercers, and the Richardsons, who were hosting the Big Event. Three families in Castle County that probably surpassed her own family’s renown in the neighboring county. So here she was, giving up a Saturday when she could have been relaxing after a morning of fox hunting, to attend a wedding.

Tucking a loose strand of hair behind her ear, Amanda popped open her camera’s memory card slot, slipped the old card out and tucked a new one in that she dug from the pocket of her dress slacks. If her boss wanted pictures, then by God, she’d give him pictures by the hundreds. As soon as she locked the card in place and clicked the door shut, she turned the camera back on and raised it to begin clicking again.

That’s when she saw him in her viewfinder.

At first, she thought it was Caleb Allred. Then he turned and she saw the pinned sleeve. When she clicked, his head swiveled her way. Green eyes narrowed, and his expression hardened. As he took a step toward her, Amanda lowered the camera and returned his stare, forcing herself not to look away as he stalked over to her.

“Who the fuck are you?” His scowl held not a trace of friendliness.

Nice. She lifted her chin. “Amanda Brown. I’m the staff writer for the paper. I have permission to be here to take photographs.”

His glance flicked dismissively to the newspaper’s point-and-click Nikon and came to rest on her again. “You don’t have my permission. Shoot all the pictures you want, but not any of me.”

She wanted to give him a childish you’re not the boss of me response, even started to launch into her First Amendment spiel, then she glanced at the empty space where his right hand should be.

His lips twisted. “What was the first clue? The dimple on the opposite side from Caleb’s? Oh, right…the missing hand. I see the paper’s still employing rocket scientists.”

It was tempting to just tell him to fuck off, if she allowed herself to use that kind of language. Instead, she propped her fingers in her pockets and tilted her head. “Have I done something to make you angry?”

“You’re a reporter, and you’re here like you have some right to be.”

“I told you…” Amanda didn’t get any further. An older, taller version of Noah approached, concern on his face. She bit back what she’d been about to say as the man spoke.

“Son, Becky and Eli are about to cut the cake. Your sister would like you there.”

Noah turned to his father, nodded and left her standing there. Amanda kept her back ramrod straight. What she really wanted to do was sag with relief. Leaving now would be great, but she had a job to do. The cake cutting was a money shot. Amanda would just make sure she didn’t get Noah anywhere in the picture.

As Amanda looked at the couples gathered closest to the bride and groom, what she saw were not only strong family ties but powerful friendships that she knew firsthand had been tested over the last few years.

A shaft of envy shot through her, but she willed it away, picked up her camera, and got the shot her editor really wanted—minus Noah Allred. As she lowered the camera, she caught him watching her.

He stood close to his twin. They might have been identical at one time, but there was a whole lot more than just Noah’s missing hand separating them now. Caleb’s eyes sparkled. He was back in town and getting ready to open a new business. Noah’s glance was a dead man’s, someone putting in time and hoping the end would come soon.

Amanda was all too familiar with the feeling. It was one she’d never quite forgotten.

She sighed. Walk away. She couldn’t do anything to help him. Noah Allred was so far gone in his own bitterness…Amanda shook her head. She felt sorry for him, and right now anyone’s sympathy was the last thing he wanted.

Noah watched her leave, tracked her all the way to where she vanished around the corner of the house. Amanda Brown. He knew her name. It was all over the little weekly paper. Hell, she probably wrote most of it. And if it wasn’t on a byline, then it was listed on a photo credit.

Her photos weren’t bad. Not that he’d tell her that.

As a waiter started past, Noah snagged another glass of champagne. It was working pretty well with the pain medication, but bourbon would be better. He’d get some of that later. His glance strayed to his parents. They’d wanted him to come home. Help them run the farm.

Who were they kidding? He hadn’t done crap since they’d traveled back to Mountain Meadow. His mother said give it time, but there was way too much time. The only way he’d found to make it pass any faster was to keep self-medicating. He had wanted to come home, but what he hadn’t been prepared for was the purposeless feeling that haunted his every waking hour.

He drained the champagne, his glance drifting to Becky and Eli, posing with Eli’s son, Bash, for the wedding photographer.

He should have been the one taking his sister’s wedding photographs. As he watched the formal pose the photographer set up, Noah cringed. Anyone with half an artistic bone could see his sister and her husband were about as far from formal as you could get. For an instant, he could feel the weight of the camera in his right hand.

He slapped the champagne flute down so hard on the waiter’s tray the guy nearly lost his balance. With a scowl, Noah turned away, slipped his hand in his jacket pocket and wrapped his fingers around the hip flask. Maybe he’d just step inside for a minute, find a quiet spot…

He glanced sideways to find his older brother, Luke, standing there.

“Don’t worry. It takes me a long time to get drunk. Hard to unscrew the top with only one hand, you know.” He pulled the flask out. “Unless you’d like to help? I’ve mastered the basics…taking a piss, zipping my fly. I can even halfway write my own name. Next year, I’m hoping to start kindergarten.”

Luke’s jaw tightened. “Just how long are you planning to work the self-pity routine?”

Anger made Noah drop the flask in his pocket. He started to raise his fists. But there was only one.

He spun away and stalked around the front of the house. The first thing he saw was the reporter, leaning against her car, her cell phone at her ear. He heard her finish her call. As if she’d just realized she wasn’t alone, she turned, her eyes widening when she saw him.

Noah wanted to piss someone off. He was desperate to make someone angry, to elicit some reaction other than the pity he saw from everyone around him. Poor, one-armed Noah.

He stalked forward until he was well within her personal space. Close enough most women would have backed up. She didn’t, and that just pissed him off more. Raking her from the top of her blond head to her long legs, he drawled, “Everybody at this wedding seems to be paired up. If you’ve got a few minutes, I’d be up for a good pity fuck before you go.”

Her eyes widened. He swore he saw a flash of anger, but then she laughed. And that just ramped up his own temper.

Noah wrapped his left hand in her ponytail and thrust his hips against hers. “I’m not joking.”

She’d lowered her thick-lashed lids for an instant, but when she stared at him again, he didn’t see a lick of fear in her dark blue eyes.

“I bet you say that to all the girls.” She raised her wrist, looked at her watch. “I can spare you two minutes, then I’ve got to leave so I can make it to the pie judging contest at the Presbyterian Church. Will that be enough time?”

She pushed him away. “I’m about to get a whole lot colder. If I screwed you, you’re right, it would be pity, but not because you’re missing a hand, Noah. You’re missing your soul.”

As he stared at her, she opened the car door and slipped behind the wheel. “They didn’t cut that off, you’re doing it to yourself a little bit at a time.”

She started the engine, shut the door and rolled down the window. “Sorry, two minutes is up. I’ll have to take a rain check.”

Noah wondered if his mouth was hanging open. He rubbed the ache in the back of his neck. Amanda Brown. Where the hell did he know that name from? It was more than the paper, he was sure. He stared after her as she disappeared down the drive in her little sedan.

When you think you’ve lost everything…

Everywhere I turn since I came back to Mountain Meadow, she’s there with her d**n camera pointed in my direction. It’s bad enough my accident cost me the photography career I love, but does she have to shove it in my face day after day? I came back to lick my wounds and find some peace, even if it is at the bottom of a bourbon bottle.

Why won’t she leave me alone?

…and the only one who understands is the last person you would choose.

He wears his pain like a badge of honor and makes everyone around him miserable. He thinks I’m nothing but a rich dilettante out to make him even unhappier. What he doesn’t know…what no one knows…is just how well I understand the bone-deep pain of losing everything…and not being sure it’s worth starting over.

In this first of a new series, A Place to Heal, author Laura Browning returns to Mountain Meadow, Virginia for the story of Noah Allred, a man overwhelmed by personal tragedy. His enemies to lovers romance with newspaper reporter Amanda Brown takes you on a rough ride to happily ever after.