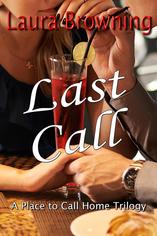 Caleb liked that Leah looked him nearly in the eye. Today, she had a bit of color in her cheeks, and he would swear a faint dusting of freckles across her nose. She had started to speak, but his attention was caught by the fullness of her lower lip. What would she taste like? They had kissed all that time ago. He remembered it had been hot, but now he studied her and wondered if it would be sweet too.

"Caleb, did you hear anything I said?"

To how surprisingly sexy she was standing there with no makeup on and wearing a T-shirt that was at least two sizes too big.

She snapped her fingers in front of his face. "Hello?"

"Don't feed him too much junk. He's not used to it, and it will give him a tummy ache. He takes about an hour nap after lunch too."

"That I had kind of figured on. I'll stay away from the junk too. Cut me a little slack, though. This is all new to me."

He dug into his pocket. "Oh, and I brought you a present."

He pulled out the cell phone and handed it to her. This time it was her eyes that widened.

"This must have cost a fortune."

"Nah. It wasn't expensive. Do you need some help figuring out how to use it?"

She turned it over in her hand, smoothing her fingers across the girly, pink plastic protective case he'd put it in. She giggled and smiled. Caleb's heart constricted. It was a simple cell phone, not even as fancy as what most people carried in their purses and pockets these days.

"Would you mind showing me how to do the basics?"

He stepped closer to her so they could both look at the screen. This close, he smelled the flowery scent coming off her skin. Caleb drew in a deep breath, enjoying the fragrance.

"This button on the back will bring your screen up. See?"

She nodded as he showed her.

"It also turns it off again too. If you hold it down instead of touching it, it will turn the phone off."

As he continued to explain, Caleb became aware that Leah was also surreptitiously studying him. "So you swipe your finger across here, like this, to answer a call. When you're through, tap end and it will hang up the line."

He was inches away. Her lips were slightly parted and her eyes wide. Without giving himself time to think, Caleb ducked his head and kissed her. Nothing long and drawn out, just a quick brush of their lips.

"What are you doing?" she asked, her voice a little breathless, but not angry. And she still hadn't pulled away from him.

"Kissing you." He moved in to try it again. This time for a little longer. She was like tasting heaven, her lips soft and sweet, and man oh man did he remember this. With each touch of their lips, the memories came back. This time, he held the real woman, not some fantasy designed to deceive everyone, including him.

At some point, his arms had circled her, pressing her body along the length of his. He teased her lips with the tip of his tongue, moaning softly as she opened for him and let him inside. Conscious this was neither the time nor the place to continue, he pulled his lips from her and pressed her head against his shoulder.

"You think we should forget it?"

He smoothed his hand over the back of her head. Her short hair was as soft as silk beneath his hand. Turning his head, he inhaled her fragrance again before answering.