​Joe’s gaze narrowed on the light high up in his neighbor’s house when he arrived home. He had yet to see the new teacher, just her cat, which dozed during the mornings on the wide veranda as Joe went out for his morning run. The cat was a sleek, black-coated animal with the most amazing golden eyes that followed him wherever he went. Joe knew from Tyler that rather than fitting his image of the matronly teacher, Miss MacVie was young and she looked like her cat, whatever that meant. Tyler wasn’t quite at the age yet where he paid attention to females. Either way, he had one advantage over Joe—Tyler had actually seen the mysterious Miss MacVie.

Joe fixed dinner, listening to some classic rock while he hummed along. As he sat down at the kitchen table, he glanced out and saw once again that the only light came from the third floor window. After dinner, he worked in his study, polishing his sermon. When he stopped for a snack around eleven, the same light still burned in the house next door. In the middle of the night, he went downstairs to get a drink of water, pausing as he looked out and saw the light was still on. Was she all right? His brow furrowed as he stared at that window. Weren’t artists always going on about needing natural light? That must mean they painted during the day. So what was she doing?

He stepped out onto his back porch. The sash was open, and for a moment, he thought he heard soft sobs. Joe frowned and started to cross the drive to her house, but then the light went off. He watched the window for several minutes, but no other light came on. He was torn between wanting to find out if she was okay, and not wanting to intrude on someone he had never met at one o’clock in the morning.

Tabby felt drained and glad it was Friday. The school year started Tuesday, right after Labor Day. Although she looked forward to it, today she simply wanted to get her work done and go home. She’d finished last night’s painting, and if she could help it, she wouldn’t look at it again. Maybe someday she would find a market for her work, but not now. It was too personal.

Tabby decided she would use the weekend to get things in order in the house and finally go to Tarpley’s to stock the kitchen. When she arrived home a little after noon, she spotted a tall, lean figure with broad shoulders and a tight butt headed through the backyard next to hers over to the Baptist church. His caramel-colored hair glinted with golden highlights in the sun. No way was that the minister. She had pictured an older man with slicked back hair and a bit of a paunch when the real estate agent mentioned she would be living next to the parsonage. Tabby was surprised to find out he was not married, having assumed he was an older, widowed man. Maybe this guy was a parishioner.

Well, no matter. Minister or not, she had no intention of making his acquaintance. Tabby made a point of staying as far as possible from organized religion. Some of the biggest hypocrites hid behind the pages of Bibles they made a habit of thumping. In her experience, the more of a hypocrite they were, the louder they thumped.

Tabby retreated inside her house to assess what she’d need from the store. When that was done, she changed her skirt and long-sleeved shirt for a pair of biking pants and shoes. As hot as it was, she still slipped a long-sleeved shirt over her head so her arms and torso were covered from her wrists to her neck. She scraped her hair back into a ponytail, put on her helmet, and went for a ride.

Heading out of town quickly, she enjoyed the wind and the sun on her face as she rode along a narrow, twisting back road. She had a specific destination in mind, at least an address she wanted to check out, and was vaguely disappointed when she pushed her bike up the long, drive to find not the house her mother had described, but a newer, log home, and it appeared deserted.

Tabby studied the small grove of trees at the top of the hill behind the house and left her bike near the drive as she climbed to the top. Mama had told her she used to sit there, and Tabby wanted to see it close up. She was surprised when she reached the summit to find a tiny headstone there inscribed with the name Hope Richardson and a date thirteen years earlier. There was also a quote, “Like our love, born too soon. You will always be our best and brightest Hope.”

The stone didn’t look weathered enough to be thirteen years old, but it also wasn’t brand new. Why would a stone with the name Richardson be here on this land? Tabby’s fingers tingled as she touched the cool stone. The edges around the engraving were rough. Tabby frowned. She looked at the quote again, overcome with the feeling that she didn’t know nearly enough about the woman she had come to find.

All at once, she felt as though she were intruding, which in fact, she was. A nervousness she couldn’t explain overwhelmed her, and she leaped to her feet before running down the hill back toward her bike.

“Whoa!” A voice like a whip cracked, and strong hands grabbed her arms. Tabby froze. She fought back the urge to struggle away from the firm grasp as mental images of another man in another time flooded her brain. She had to fight the panic nearly blinding her, but it was a losing battle. 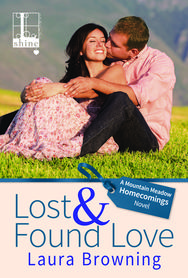