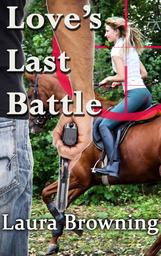 The door opened and her elder brother, Brandon, stuck his head in. “Come on, squirt. Mother’s getting nervous, so she sent me up to get you.”

She looked in the mirror one more time. She’d worn her contacts too long today. She could either stick on her glasses or be half-blind all evening. It was just her luck, when she’d tried to get corrective surgery, her doctor had told her she wasn’t a good candidate for it. Maybe in a few years. That didn’t help now. With a sigh, knowing she would have to bear her mother’s disapproval, Morgan opted for vision and slid her dark framed glasses on. In an instant, her little black dress went from looking sexy to being librarian dressy.

“You look great,” Brandon told her as he hurried her toward the door. “Let’s go.”

Morgan laughed. “Only a big brother could pass that lie off. Well, it’s not like anyone will notice me anyway.”

“People notice you, squirt.” He held out his arm.

“Where’s Lucy?” She changed the subject.

Morgan shuddered. “Remind me not to drink the water.  All my siblings or their spouses have either just given birth or have one in the oven.”

Brandon laughed, tucking her fingers in his arm and covering them with his other hand. “Your time will come.”

“Not if I can help it,” she muttered, drawing another laugh.

The evening was yet one more in a long list of evenings Morgan would have paid to avoid. After shrugging off her mother’s disapproving glare at her glasses, Morgan snagged a champagne flute, downing a couple of glasses before dinner while listening to one of her brother Phillip’s fellow congressmen. Obviously out of his league amid her parents’ friends, he’d latched onto Morgan, who’d been doing her best to blend into the shelving in the corner of the room. As far as she was concerned, seeing her nephew and listening to Pippi play the piano were the highlights of this evening. She only wished she’d been able to go back upstairs with the baby.

“Morgan,” her mother called with an imperious note in her voice. “I’d like you to meet another of Phillip’s colleagues.”

This was her mother’s latest push, introducing her to single politicians. Right. Because Morgan was sooo fascinated with legislation and the inner workings of Washington. Now, had the guy had a military or FBI background, she could have pumped him for information.

“Quit making faces, Morg,” Phillip whispered. “He’s from California. You couldn’t get much farther away.”

She darted a glance at the sibling closest to her in age, but as always, his expression revealed nothing of what he really knew. Morgan always suspected he knew a lot more than anyone else. Somehow, he’d picked up on her desire to escape her parents and the albatross of working at Barrett Newspapers.

“I’m not tying myself to someone just to get out of here.”

“Of course. I’d forgotten how overjoyed you are at going to work at NNO.”

“I can write five hundred words or less all day long with one hand tied behind my back.”

“And die a little each day you do. Break out of it, Morgan, or truly give in, but your surreptitious rebellion’s not getting you anywhere.”

She drained her champagne glass, thinking of B.B. Morgan’s advance check and the money already accruing in books sales. “It’s worked for me so far.”

After setting her latest glass on a passing waiter’s tray, she pasted a smile on her face and joined her mother and the man—oh, peanuts—who was shorter than she was.

“This is Phillip’s younger sister, Morgan. Darling, this is Congressman Victor Brueger.”

Morgan smiled and bent her knees a bit to make herself appear shorter while she tried to make conversation with the serious young politician, but in just a few minutes she found her mind wandering when his discussion of state budget crises seemed to go on and on and on. Maybe she could work on a plot line involving a congressman’s daughter. Tie it into terrorism… She wondered if Grimes was comfortable. She’d hated leaving him in such a rush after the hunt. Normally, she would have stayed to poultice his legs. Claude probably wouldn’t do it either. He’d be busy packing…

Brueger looked crushed. “I wondered if you would like to attend the gala at the senator’s house with me next Friday evening. Celestine is entertaining.”

She liked Celestine. Wait. Maybe the congressman’s daughter could be famous in her own right… “Do you mean Senator James? Celestine is entertaining there?”

It would mean a late night before the first hunt with Van Pel, but she’d be all right. Morgan smiled, genuinely this time. “I’d love to.”

“I’ll double your salary and your time off.”

Nick glanced up from where he’d been shoving the remainder of his clothes into a big duffel bag. Celestine, the pop singer he’d headed security for since damn near forever, reclined on his bed in the small apartment he kept at the back of her mansion. Although he knew her as Celia Kelly, she was famous enough now to go by just the one name—Celestine.

“Damn lotteries. They should be illegal.” She pouted and batted her eyelashes. “I don’t want you to go.”

“I can’t help it if I had the lucky ticket. Besides, since you’re not on the road that much nowadays, I spend most of my time twiddling my thumbs. I need to find something new.”

He zipped the duffel bag. The rest of his belongings he’d shipped ahead. “It’s time, CeeCee. Winning the lottery just gives me a graceful way to exit, and plenty of money to do it. You and I both know Jim will be a better security chief for you. He’s still hungry for it. I’m ready to do something different.”

“Moldering away on a farm is not how I would have pictured you.”

He wasn’t at all sure it was how he pictured himself. “I’ll have time to read and ride. Who knows, maybe I’ll write my memoirs about my crazy years with one of the world’s best singers.”

“One of?” She arched her perfectly shaped brows.

Nick laughed, crossing the room to give her a hug. “Come visit. You can go for a pony ride with the kid who keeps her horses there.”

“That’s another thing…I can’t believe you agreed to let some girl hang out. Be careful, Nick.”

He shook his head. “Claude talks about her like she’s his grandkid. How could that be a problem?”

Celestine shook her head. “You’ve never noticed it. In all these years, Nick, baby, there’ve been girls panting after you at the same time I’ve had fans panting after me. If I weren’t old enough to be your mother, I’d have taken you into my bed years ago.” She pointed a finger at him. “And if you ever share my true age with anyone, I’ll hire a hit on you.”

He gave her another hug before slinging the duffel across his back and heading out. It was time for a change, time to do something where he could relax and not wonder constantly when he wouldn’t be able to dodge a bullet or best the bad guy in a battle of fists.  Taking it easy sounded kind of nice for a change. And who knew? He might go on a few pony rides with the kid at Claude’s place.

The sun had nearly set by the time Nick pulled into the long gravel drive that led up to the old man’s house. He really had to quit calling it that. It was his place now. Paid for in full. As he switched off the engine and stared around the barnyard, Nick narrowed his eyes. No sign of the kid. She was probably at home getting a bath and dinner.

The front door of the rustic house opened as Nick was getting out. Claude descended the steps stiffly, his gnarled, work-roughened hand outstretched. Nick shook it and glanced around. “Nice and peaceful, Claude. I think I’ve gotten the best end of this bargain.”

“That you have. I’ve got it all packed so we can get loaded first thing in the morning.”

Claude gave him the tour. Nick didn’t figure he’d change much. He hadn’t bought it to do a makeover, just to have a place to chill, a place where he could put down some roots.

“I hate I can’t introduce you to Morgan today, lad, but the lass had a family obligation, brother’s baby being christened and all, but you’ll likely see her tomorrow afternoon. She’s here every day.”

Nick nodded absently as Claude rattled on. The last thing they needed was a kid in the middle of things, getting in the way while they were trying to move the few belongings Claude had decided to take with him. Nick was more than ready to turn in when Claude suggested they make an early night of it.

Wow, wasn’t he already going all early to bed and early to rise. If he wasn’t careful, he would be planting a vegetable garden and turning in his jeans for some overalls.

Not effing likely. He laughed quietly as he punched the pillow in the guest bedroom and willed himself to sleep.

Claude mentioned again that he wished Nick had had the chance to meet Morgan as they loaded the last of the old man’s belongings into the farm truck.

Just to keep the guy happy, Nick asked, “Do you have a picture of her, so I’ll know who she is?”

“Aye.” Claude dug out his cracked leather wallet and extracted a somewhat crumpled school picture. Nick stared at it. Cute kid. Bet she’d be a knockout when she grew up. Long, blond braids hung down over a white blouse and plaid jumper. Private school. Figured. The kid had two big Thoroughbreds sitting in the barn. He hoped she wouldn’t be a brat. The last thing he needed was some snotty-nosed bitch-in-training trying to order him around his own place. That wouldn’t last long. He handed the picture back.

The bandy-legged Yorkshire native glanced around the farmyard one more time. “Aye. Let’s have done with it.”

They climbed into their vehicles—Nick behind the wheel of the truck and Claude behind the wheel of his beat up little sedan. Nick was surprised when he didn’t have to put the seat back much, but he dismissed it. Maybe the hunt’s kennel man was tall.

It took next to no time to unload everything. Nick offered his hand. “You need anything, Claude, let me know. I still think I ended up the winner in this deal, being able to walk right into a furnished farmhouse and a fully-equipped farm.”

Claude shook his head. “No, lad, I’m the one’s been lucky. Barely even had it on the market before you showed up. And with you buying everything on the place and agreeing to allow the hunt’s kennel to remain, I’m flush and free to take a trip back home. If you’ll be hunting, Morgan’s a good one to show you the ropes and introduce you. I’ll sponsor your membership.”

Nick grinned. “I’ve already ordered the clothes.” He tugged at his ears. “Think my earrings will go over well with the horsey set?”

Claude laughed.  “You’re taking up a sport that has more women than men. You’ll be a hit, lad, earrings or no.”