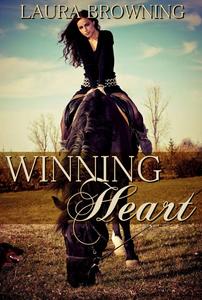 She set her mug down. It was a way to delay, a way to give herself a moment. He’d revealed more to her with words and
expression than he’d probably intended. Oh, there were strings, emotional ones so powerful she was afraid to even name them.
She had felt it almost from the first moment she had seen him standing on the porch outside the barn office.
At some point, she must step out of her comfort zone. She was more than willing to take risks when she rode Rosie, so why
not here, why not now with Nelson? Her stomach fluttered.
What did she know about him? What did he know about her? She thought of his kindness, the way he’d faced off with Payton
Southard. The way he’d kissed her. Wynter looked back at him, staring into his midnight-blue eyes.
“I’ll stay.”
And then he did something she seldom saw him do. A gentle, beautiful smile curved his mouth, and tears welled in her eyes.
“Let me unbraid your hair,” he murmured. She slid closer on the couch and turned her back. His fingers were swift and gentle
when he undid her long braid, fluffed her still damp hair and eased his fingers through the length of it, stroking without saying a word.
She sensed the way the repetitive movements helped him unwind and realized they did the same for her. She relaxed, staying that way even when he pulled her back against him. His breath was warm on her ear as he rubbed his cheek against her head.
“You have the most beautiful hair I’ve ever seen,” he rumbled. “It burns with such a deep, rich fire, yet it feels cool like silk. I touch it and think about my hands on you--how you will feel that same way--sleek, cool and on fire at the same time.”
Wynter’s breath caught in her throat as his hand brushed against her breast when he caressed a lock of hair curled over her shoulder. She turned her head and found his mouth very near her own.
“Nelson?” Her voice was a whisper. Need filled her from her breasts up to her cheeks. He tilted her chin up and kissed her. Wynter twisted and slid her hand up around his neck. This time there was no tentativeness as his tongue tangled with hers. The kiss was a drug that sapped the strength from her limbs and set pulses throbbing in other areas.
She leaned against him, sucking on his lower lip. His hand slid under the edge of the robe and caressed her aching breasts. Her breathing was ragged and uneven. She had never been touched like this before, and it made her feel so heavy and slow she couldn’t think straight. Control slipped from her grasp and panic made her tremble.
“It’s okay,” Nelson soothed, as if he sensed her fear. “I won’t do anything you don’t want.”
“That’s just it,” she admitted. “I don’t know what I want.”
View on Mobile